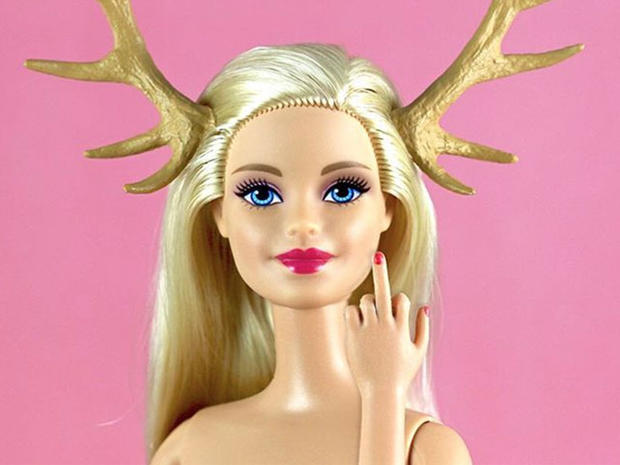 Barbie, the iconic toy, was first created in 1959 and immediately became a major hit because it was the first doll that didn’t resemble a baby. Although in the past she has played more than 150 different roles, with various professions including that of President of the Usa, so certainly you’ve never seen her in such guises. The 36-year old Toronto-based conceptual artist, with South African origin, Annelies Hfmeyr, decided to show in her Instagram account Trophy Wife Barbies this icon in the poses the most politically incorrect of all time.

“Trophy Wife Barbie’s main goal is to highlight the limitations of labels and to explore gender issues and the modern female identity. The work is an invitation to consider what might happen if we focus on the things we have in common, rather than fear the things that make us different.”

Not quite what I had planned for Valentine's Day ❣️#TrophyWifeBarbie #bleedinglove

Barbie, as a timeless icon – recognized by everyone but carrying meaning that varies tremendously with the viewer – affords a medium that’s highly relatable and amusing. The antlers are a physical representation of a label imposed on her, likening her to a hunting trophy; something to be owned.”

We're ready! ✊🏿✊🏻✊🏼 What are you marching for? #TrophyWifeBarbie #shitjustgotreal #womensmarch

That’s why here we meet a divorced Barbie with antlers sprouting from her head that smokes weed, drinks wine and owns a colossal arsenal of pink guns. And, as any other woman, she vomits, has periods, cellulite, and goes to bathroom. She also doesn’t wax, breastfeeds in public, has transgender friends and frequently gives the finger. She is naked but with stars on nipples not to be banned by Instagram, dressed with dollar to fight the wage gap between male vs female, posing for selfies undress with a deluge of likes or couture dressed with very little likes and always ready to face any current topic.

My friend Kendra is a trans woman on Hormone Replacement Therapy and has started to grow breasts. Like @courtdemone, Kendra wonders at what stage of development her breasts will be sexualized and worthy of censorship #DoIHaveBoobsNow #TrophyWifeBarbie

“She’s a real woman that is interested in more than just appearance, and she owns her vices. Classic Barbie, as we know her, is not a reliable persona.”

After the rapid growth of Trophy Wife Barbie on social media, the artist Annelies Hofmeyr has launching a line of products like t-shit and prints you can buy here.