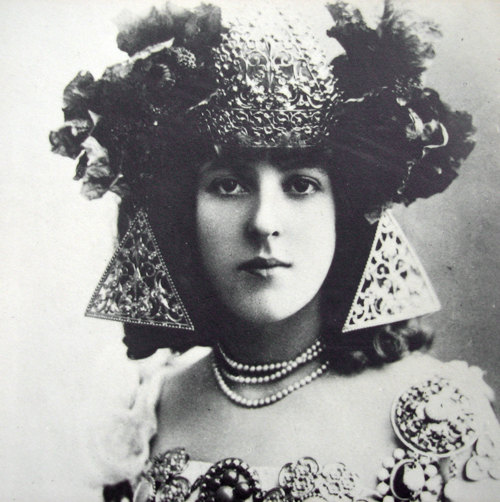 The most beautiful woman of the century: it is with this title that Edmond de Goncourt – writer and founder of the homonymous literary prize defined Liane de Pougy, famous courtesan, dancer and glamour icon ante litteram. It was one of the leading protagonists of the divas of the end ‘800: so much so that she, Emilienne d’Alençon and Cléo de Merode were called “The Big Three of the Belle Epoque.” 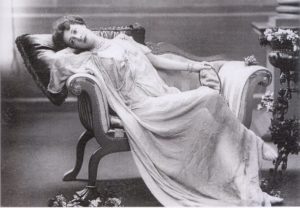 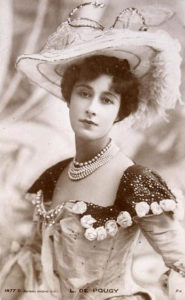 Anne-Marie Chassaigne which later became in art Liane de Pougy, was born in La Flèche in the French province July 2, 1869 in a high noble family but without means, receiving a catholic education in the convent of the Jesuits in Auray. At 16 years she was given in marriage to a lieutenant, Henri Pourpe that will soon prove to be a very brutal man. Liane, plagued by continuing harassment and violent beatings, it is said that her husband also fired her with a gun, fled at the age of 18 years abandoning her child too (the pilot Marc Pourpre, who tragically perished during the First World War) to Paris where she divorced scandalizing the family. 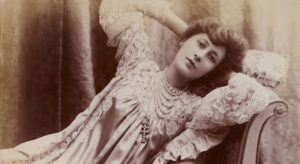 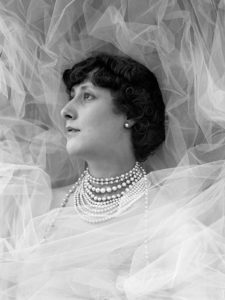 Liane did not matter to be considered a fallen woman by right-thinking: she is amazingly good looking and firm in his granite conviction of being destined to a future far from trivial. Eleonora Duse, who was her friend, advised her:

“You are so beautiful that you’d better not open your mouth, you do not have any need. The rest is enough.” 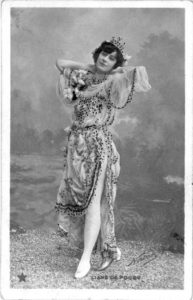 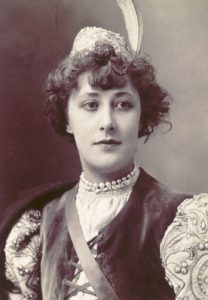 Striking symbol of femininity and seduction she launched into effervescent and dissipated Belle Epoque characterized by a strong libertinism and desire for crazy fun. Her travelling companions were the figures of the European aristocracy, the intellectuals, playwrights, women of pleasure, actresses and journalists of more obscene gossip. 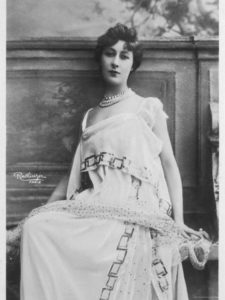 Her beauty was immediately noticed and she soon became a star of the Folies Bergère where the public went crazy fascinated by her great charm. The rivalry with La Belle Otero contributed to the fame of both. Liane was as diaphanous as the Spanish courtesan was amber, as thin as her rival was curvy, their opposition being at the center of Belle Epoque Parisian gossip. 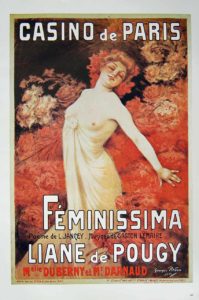 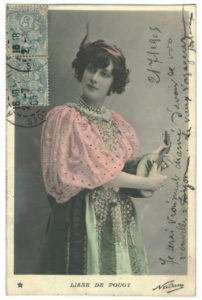 As was the custom of that time for dancers, Liane decided to even become a courtesan. At the beginning she was protected and guided by the expert Valtesse de la Bigne, courtesan, lesbian, lover of Napoleon III and the inspiration of Nana, Zola’s character in the book. She was a valuable counselor for the young de Pougy, with which even entertained a love affair and represented a formidable mat for Liane, which was introduced in the alcoves of the most influential men in Paris transforming the devout adept in a researched and handsomely paid demi-mondane. As a courtesan she was so required, at very high prices to be called “le passage des Princes“: fifteen minutes with Liane cost 120,000 francs, when her cook earnings was 200 a month. 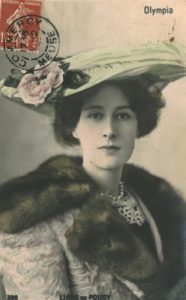 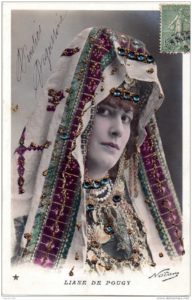 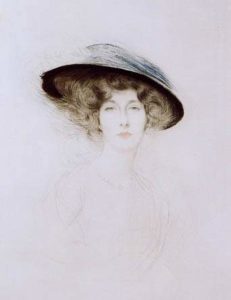 Charming and unscrupulous, she become adept at satisfying the rich and prestigious “customers” with which she indulged. Nor she denied the bored ladies of high society who seek the pleasure beyond the usual patterns of eroticism, and that made her rich. It is said that Prince Miatlef, in Petersburg, as a reward for a night dedicated to “special” practices, gave her a million and a half of fabulous jewels. Liane actually did not like men preferring women but she was also conscious of not being able to flaunt their sexual preferences, so ambiguously and cleverly she avoided to create sensations and only went from one to the other with enviable nonchalance rewarded generously by lovers of both sexes. 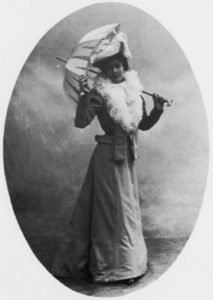 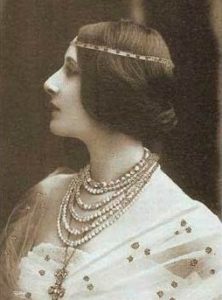 Her fame crosses the borders of France and from Moscow to Washington Liane de Pougy awakened the sexual appetites of high society, the representatives of which laid at her feet colossal fortunes. Unique and extraordinary jewelry of inestimable value were awarded as a tribute to her beauty by the many worshipers who would do follies for her. She was the scope object of desire of a large group of admirers among the most prominent exponents of the time: among them Jean Lorrain, Lord Carnarvon, discoverer of the tomb of Pharaoh Tutankhamun, Henri Bernstein – lover with capital L according to Liane – Maurice de Rothschild – perhaps even his wife – the Polish count Roman Potocki and an unknown number of Counts, Dukes and Princes of the European royal families. 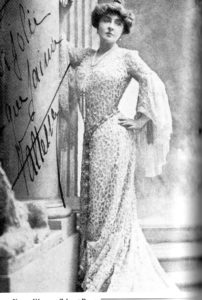 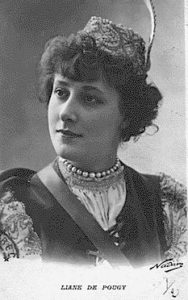 Liane as well as courtesan she candidate herself as a writer, actress – she befriends Sarah Bernhardt who taught her acting – show woman, model and pin-up, the muse of Marcel Proust inspiring him the character of Odette and Colette for her Claudine becoming the alluring icon of Paris in twenty years of increasingly excessive evasion. 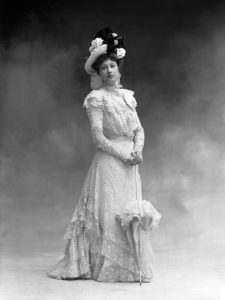 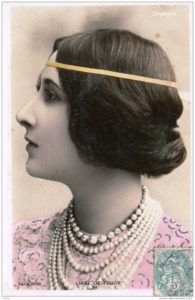 In 1899 Liane knews the American writer Natalie Clifford Barney, and their relationship upset the chronicles. She finds herself in the grip of a passion that can not dominate and when Natalie betrayed her with other women, perhaps Liane, to take revenge, she improvised a writer and published a book entitled “Idylle saphique” ( “Sapphic Idyll”) a novel that get a resounding success with the public. In 1908, at the height of the dancer and courtesan career, she mets Prince Georges Ghika, of Romanian origin, but fell out of favor, with whom she married. 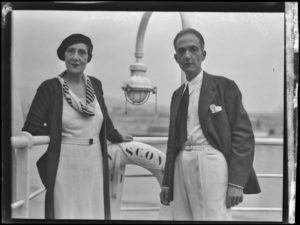 She became princess, changing their lifestyle: she was rich, much more than the husband, who maintains, and with a respected name which now she intended to honor. George knew the young Manon Thiebaut, Liane’s former lover, and fled with her, abandoning his wife. The two, however, agreed on a very singular point: Liane promises Ghika that, until away with his lover, she will not stay with men, but only with women. In her own way, in short, she promised to be faithfull to him. 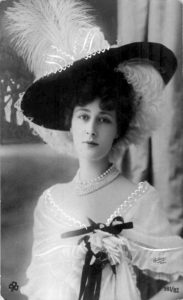 George ended up going back to her a few months later, but the relationship was never idyllic as earlier and became troubled and chaotic. The death of her son in 1914 was a shock that annihilates Liane, pushing her towards mysticism and the Catholic religion. After the death of her husband Liane, Princess Ghika, entered the tertiary order of San Domenico as nun named Anne-Marie de la Pénintence. She became an exemplary nun totally repenting of the dissolute conduct during their existence in the past by refusing even to meet Natalie Clifford Barney, her great love of the past, and now simply called “my greatest sin”. She ended her days in prayer, in Lausanne, where she died in 1950 almost forgotten. A gracious figure that perfectly embodied femininity’s duality: incarnating the whore then the saint. 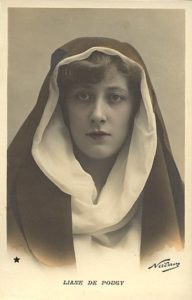 People, Timeline
La Belle Otero, the great courtesan of the Parisian Belle Epoque
Places to stay, Travel
Hôtel Maison Souquet: a temple to hedonism in the heart of Paris
Design, Lifestyle
In Paris the exhibition “Imperfect” in perfect wabi-sabi style